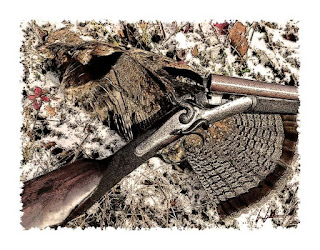 What hit me first, even before the crawling chill making its way through the clothing layers since stopping, was a distinct memory, "I've been here before."

I had been there. In the exact spot. It was December 1958 and in a light snow, with a very crisp chill in the air. Only then my feet were a size 6 boys and freezing like exposed chicken knuckles! At least now, my feet weren't freezing. But the blood laced adrenalin jitters were still there. And I loved it.

As I look down at the single ruffed grouse posing in 'la mort avec l'honneur' alongside my dad's old double-barrel shotgun, resting in the skiff of snow, I am launched back in time to my first grouse hunt on that cold December day in '58.

Dad came into my room well before light to wake me. But he didn't need to, I'd hardly slept all night. He barely got the door opened with I popped out of bed like the 20 gauge shells from dads old side-by-side.

"Well, aren't we perky?" He said with a big grin forming around the deep cleft in his chin. "Breakfast in 15. See you in the kitchen." "

Yes sir. Be right there.", I replied while jumping into my clothes.

A few splashes of water on my face brushed teeth and a token stroke of the comb and I was good-to-go.

Mom was just finishing the pancakes, oatmeal, cold raw milk and coffee when I slid into my chair.

"Say bud. 'Spose we could get this 'early rise and ready quick action to become a regular part of your morning ritual? Hmm?", she said, smiling in front the more serious suggestion.

I knew I was busted. So I tossed back a bit of humor hoping to get unhooked.

"Well, I guess I could if there was a hunting or fishing trip connected."

I attempted to slide that slick sales job by with a 'cute kid grin'. I lost. Oh, well, who cared. I was heading out to hunt with dad.

Breakfast is never better than those taken just before you head out afield or to the water with dad.


Odd?  The viewfinder on the camera fogged up just as I remembered that bit of history.

As I waited for the fog to clear, I remembered the few moments before that first grouse bust out of the cover.

When I went with dad in the field and there was a gun present, I quartered dad on his left side like a shadow. Dad stood between 6'1" and 6'2" tall in a lean 175 pounds, framed in all muscle and sinew.

My Grandpa, always told dad this same thing; as well, me and my brother - that what we needed most was...'seasoning'. This was Grandpa's way of telling you to get back to work and toughen up. I don't believe Grandpa was much into fun. He was too busy being a drill sergeant in constant practice. As a result of many years of conditioning, dad was not easy to keep up with. But when we hunted in the woods, he was a lot easier to shadow. I was eager and he slowed down a bit. He enjoyed being in the woods and didn't want to loose any time of it. A great combo that worked to keep me from a constant, "Hey, keep up!" reminder.

I really enjoyed those times. Even more so now the older I get.


Well, of all things, this camera eyepiece keeps fogging up. Gotta wait for it to clear again.

Old Suzi, dad's 10-year-old Brittany spaniel, pushed ahead of us at a comfortable distance with her nose to the ground and one eye in the trees. She knew those birds sat in trees and she wasn't about to let one get by her. It didn't happen often either.

I was a chatter box as a kid, but I knew to keep my comments, questions, and musings to myself once we hit the trail. If I had a serious question, when I could get dad's attention, he'd gladly answer it. But I just knew that I really didn't want to over-use my 'field access'. So I learned to compartmentalize the questions and formulate them into as few as I could later on. A valuable lesson as I learned later on in life.

As I was doing some of this 'formulation', meaning I wasn't paying attention, dad pulled up, into an abrupt stop. Yep! I ran right into his left hip pocket. He didn't move but I bounced off. Dad looked over his shoulder with his finger to his lips, then reached down an helped me up. We had no sooner gotten regrouped when the grouse blasted from the bushes!

That bird scared the holy bejeebers outta me! That's for sure. But dad, he just went into one of the prettiest ballet's I'd ever witnessed to then ... and possibly since.

The grouse quartered left, dad was in full-sight-swing-and-follow-through when he squeezed off the left barrel. I just happened to be in the perfect line to see the entire scene. Dad, in swing, his squeeze of the trigger, flight of both bird and shot and the crumple of the grouse and Suzi in her trademark, hind-leg hop-n-point! Just before dad would shoot, she'd look more like Trigger under Roy Rogers than a Brittany on point.

Like it all happened seconds ago, I can still hear the sounds of the rustling leaves, the drum of the grouse's wings, dads wool clothing rotating on his body, his feet making a bit of a rotation-friction squeak, then the click of the hammer - then the entire world was encompassed in the blast! Man! for a 20 gauge shotgun, that gun could really make noise.
Well dogged! The viewfinder fogged up again. At this rate, I'll never get this thing photographed.

You know, I was surprised, when even through the racket, I never took my eye off that grouse. In mid-flight, one moment it was heading out of sight, then it just crumpled and fell in a rocketing arc, hit the ground and scooted into and under the leaves. Before we could flinch, Suzi was already on the bird, mouthed it and was in full-on happy-dog-return. I remember it was smaller than I'd thought. Beautiful. Soft. Limp. No longer flying. It was dead.

I had a sudden pang of conscience. I looked up at dad and asked, "Did we have to kill it?"

Dad looked back, put his hand on my shoulder and said, "No son, we didn't have to kill it. But we chose to. That one idea is the most important thing to learn about hunting. When you decide to take an animal's life, that decision will be a permanent choice. One that you can't undo. You cannot take back that decision. It is a natural part of life; taking an animal's life. But we must always do so being fully aware of the results of our decision. Something will die because of our choice. Never take that responsibility lightly. That's a big lesson for a little guy. But I believe you'll understand. If not now, then in time. Are you OK?"

I looked at him and then at the dead bird on the ground at his feet. It sure was pretty. I looked back up at him to say something about how 'pretty' the bird was. I remember noticing his eyes looked... 'moist'. I started to ask him, but he just smiled that wonderful smile that only my dad could give and said, "After all these years, I still take the responsibility seriously. Always remember that."


The camera lens fogged up again. Must be the cold temperature.

Memories are like that. I've never forgotten it. I pray I never do.

View the print, Ruff Double Memory and the details for ordering a print.